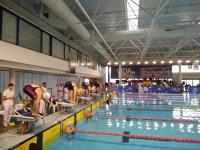 The Swiss have 442 points, followed by FC Porto with 289 and Centro Gallego T. Deportiva with 251.

The competition has the participation of 447 athletes (236 male e 211 female) representing 47 teams, among which is in highlight the presence of the Olympic Vânia Neves (Fluvial Portuense) and the returning to competition of Ana Catarina Monteiro (Fluvial Vilacondense).

FC Porto, with 32 enrolled, is the team with the highest number of swimmers enrolled, followed by Fluvial Portuense with 27 and Famalicão with 24.