Póvoa de Varzim Meeting “as moment of control and assessment” 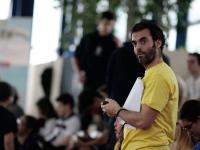 The VIII  Póvoa de Varzim International Meeting, that will take place next weekend at the city swimming pool, “is mainly a moment of control and assessment of the swimmers in the middle of this cicle of preparation and it also promotes contact between Portuguese and some foreign high-valued swimmers”, says Rodolfo Nunes, regional technical director of Associação de Natação do Norte de Portugal.

“It is foreseen a weekend with emotional and balanced finals in a city that supports the advertising and the development of swimming”, reenforces the technical representative.

The VIII  Póvoa de Varzim International Meeting, that will take place next weekend at the city swimming pool, is expecting the participation of 447 athletes (236 male e 211 female) representing 47 teams, among which the presence of the Oplympic Vânia Neves (Fluvial Portuense) and the returning to the competition of Ana Catarina Monteiro (Fluvial Vilacondense).

The Fluvial swimmer, the only Portuguese at the 10km  marathon of open water in Rio de Janeiro-2016, is one of the main figures of the event organized by Associação de Natação do Norte de Portugal, in partnetship with the local city hall and Varzim Lazer.

Vânia Neves participated, on Saturday, in the first event of World Cup/Hosa, in Argentina, being placed in no 16.

The meeting in Póvoa also marks the return of Ana Catarina Monteiro, who had a shoulder surgery last September. Her goal in short term is to come back to international competition.

In the foreign group highlight to the Brazilian Nelson Silva Júnior (Santa Cecília University), who belongs to the Brazilian swimming team with two silver medals in World Cup events (100 e 200 backstroke). From other countries are also coming the Spanish of Santa Olaya (Gijón) and of the Centro Galego de Rendimento Desportivo (Pontevedra) and the Swiss of the Ticinese Federation and of Turrita Nuoto.

FC Porto, with 32 enrolled, is the team with the highest number of swimmers in the event, followed by Fluvial Portuense with 27 and Famalicão with 24.