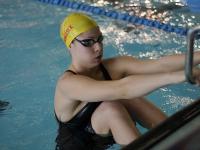 The Bulgarian Ekaterina Avramova, best swimmer in 2011 and 2012 of his country, will participate in the Torneio Internacional de São João Cidade do Porto, which takes place in the Campanhã Municipal Swimming pool on 08 and 09 June.

The 21 years old wimmer, who was at the Open ANNP Póvoa de Varzim and Meeting Internacional do Porto 2012, represents the Ealing Swimming Club. The team returns to the city by the second consecutive year and will be represented by four more male athletes (Melako Coker, John Matthias, Felix Samuels and Connor Barrett).